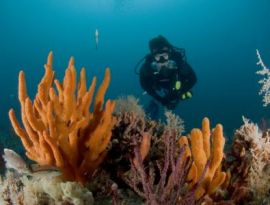 Marine protected areas have been created across the globe to stem the loss of biodiversity in our oceans. But are they working? Now, thanks to a six-year survey involving over one hundred divers, we know that the global system of marine protected areas still has much to achieve.

The marine environment lies out of sight and is expensive to survey, so its true condition is very poorly known. What we do know is that multiple threats—most notably introduced pests, climate change, fishing and pollution—are pervasive.

We also know that conditions are deteriorating. Numbers of many Australian marine species have collapsed since European settlement. Some species haven't been seen for decades, such as the smooth handfish, which was once sufficiently abundant to be collected by early French naturalists visiting Australia but hasn't been seen anywhere for more than 200 years.

If this were a mammal, bird, reptile, frog or plant, it would be listed under Commonwealth and state threatened species acts as extinct. As a marine fish, it has not been considered for any list.